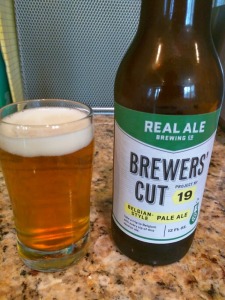 Blanco, Texas may only have 1,800 residents, but Texas has a bit of a tradition of great beers coming from small places.

Real Ale, brewed in Blanco, produces an incredible variety of beer. Between a number of regular beers, their anniversary, special bombers, and more, they produce two “unique” lines including the Brewers’ Cut.

My first encounter with the line was Project 14: Grand Cru and I wrote about Project 13: Oyster Stout. There are small batches shipped out in draught and bottles. Even-numbered projects are in four-packs while odd-numbered batches are found in six-packs.

With the Grand Cru and the Oyster Stout, I was struck about how solid the beers were despite being different from their typical output. The next one in the series continues on that line: Project 19: Belgian-Style Pale Ale 1

As a Belgian, it doesn’t have the hop-forward approach of American Pale Ales. First off, it is a lovely warm weather beer. It has a decent, but not overpowering, spice and orange flavor to the beer. It isn’t heavy and is easy to drink.

Project 19 would go great with a meal or enjoy a few in the backyard while playing games with the family. At 5.4%, you likely wouldn’t end up asleep under a tree as long as you weren’t trying to relive your college tailgating days.

Once again, Real Ale delivers with a beer that I’m sad is part of a one-time limited release. If you’re within their distribution area2, grab a six-pack and enjoy.

If you’re not local, you may have heard of Blanco recently in the news. The Blanco River was responsible for a great deal of the flooding in Central Texas to cause widespread death and destruction. While the brewery wasn’t impacted, hundreds, if not thousands, of homes flooded with people displaced. Multiple bridges swept away in the rushing water. The greatest presumed loss of life was a home swept away with two families inside, the majority are still missing.

While you’re enjoying a cold one from this Brewers’ Cut project, consider making a donation to the American Red Cross. They’re the “first responders” still on the scene helping people with temporary housing and serving hot meals to those who are trying to salvage their homes.

Additionally, the Society of St. Vincent de Paul is helping however they can while most of their work happens with “what’s next”, including their “House in a Box” project which helps to provide furniture, kitchen items, and more to help families who lost everything get a running start to the next chapter.