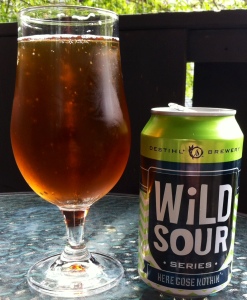 I’m not a huge fan of sour beers.  I had a phase following Beer Bloggers Conference 2014 in which I really liked sours, it’s hard not to enjoy a sour beer made by The Bruery. Like any beer style though, not all breweries make beers up to the same standards.  My longing for sours faded as I found more I didn’t enjoy than ones I really appreciated.  I am in the minority of this opinion.  Sour beers are the new trend.  Every brewery seems to be getting into the sour game these days.  One brewery that was ahead of the curve and has gone full bore into the sour craze is Destihl.

The Here GOSE Nothin’ is one of seven beers in the Destihl Wild Sour Series.  It is my favorite of the few from that series that I’ve tried.  The beer has a pungent sour aroma as it is poured into a glass.  The head retention on this beer is basically non-existent.  The picture I took of the beer, as you can see, has no foam or head at all.  I had my phone camera ready.  The head disappeared in the few seconds it took me to put the can down and pick up my phone.  There was a steady stream of carbonation that rose from the very bottom center of my tulip glass, which is one of the three glass types Destihl recommends for this brew, that continued throughout almost the entirety of my imbibing of the beer.

The sour flavor isn’t prominent in the front of the beer, but slams down upon your palate, like the Hulk crashing in from out of nowhere, in the middle and especially the finish of the beer.  I enjoy the addition of coriander and sea salt to this brew which adds a panache to the flavor and the mouthfeel.  This is not a beer I am in the mood for often, but it really hits the spot when I am craving a sour.

Along with the Wild Sour Series, Destihl also has a line of Saint Dekkera Sours which are all reserve barrel aged sours.  Destihl has a cellar with “enough vertical space for over 100,00 cu. ft. of barrel aging,1” most of that space is devoted to the Saint Dekkera Sours2.  The Wild Sour Series beers are more affordable and better suited for someone just starting to get into sour beers.  The Saint Dekkera Sours are much more pricey, but that is only due to the high quality ingredients used and the time the beers spend aging in specific barrels.  These beers are better suited for special occasions and individuals that have had some experience with the sour style. These beers I believe are more on par with Old World European sours and high quality sours put out by The Bruery and Jester King.

Along with the great beers that Destihl makes they also have two award winning gastro pubs.  I hope to make it up to one of their gastro pubs in the near future.  I hear great things about the food, and there’s nothing better than drinking a craft beer straight from the source.