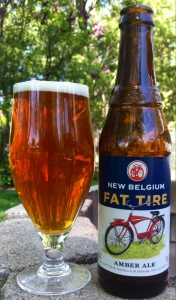 Do you mean Fat Tire?

Okay, well whatever it is, I really like it.  I think it’s my favorite beer, right now.

That was me eight to ten years ago, the guy calling his “favorite” beer by the wrong name.  Fat Tire was one of the first craft beers I ever had, even if I didn’t know what a craft beer was at the time.  New Belgium, Shiner, and Sam Adams were my first forays into beers not made by the “big boys” of brewing.

It had been awhile since I enjoyed a Fat Tire or two.  I get so caught up with trying local beers, beers with new hop strains, and beers I’m seeing for the first time, that I forget to enjoy old favorites.  After getting the news that Kim Jordan, cofounder and CEO of New Belgium Brewing, is going to be the Keynote Speaker at Beer Bloggers & Writers Conference 2015, it only seemed fitting that I sit down and review a Fat Tire.

Fat Tire is not only the flagship beer of New Belgium, it was also one of the first two “basement-brewed” beers made by Kim Jordan’s husband and fellow cofounder, Jeff Lebesch.  The beer pours a “dinosaur amber,”1 at least according to a few who took at look at my picture of the beer.  The nose of the beer though mellow is enticing.  The beer has great balance and a nice consistent flavor. The finish is clean and does not linger.  This beer pairs well with a meal or is quite enjoyable all on it’s own.  It is a great gateway beer into the wonderful world of craft brews.

“I’ve realized that I like trying out new and different beers.”  That is a paraphrase more than a quote from a younger friend of mine.  He mentioned this as we were both sipping on a Fat Tire a couple of weeks ago2.  He had eagerly accepted my offer of a Fat Tire, saying it was one of his favorite brews.  He still remembered tasting his first Fat Tire.  It dawned on him then that beer could have good flavor and wasn’t just about downing quickly to get buzzed.

Fat Tire continues to make good first impressions, introducing many to the palate pleasing that craft beers can offer.  I look forward to re-trying many of the New Belgium beers I’ve had before and exploring some of their various other offerings, especially at the upcoming conference.

Their new Slow Ride Session IPA I will not be sampling in the near future though.  Unfortunately New Belgium is currently in litigation with Oasis Texas Brewing Company over the rights to the name “Slow Ride.”  I have read New Belgium’s side of the issue, as well as what Oasis is claiming.  I lived in Austin for close to a decade, and cofounder of 365 Brew, Kraft, lives there now.  While I don’t want to disparage New Belgium, it seems as though they have forgotten a bit about their small beginnings and are “picking on the little guy” here.  I admit that I am biased given my ties to Austin, where Oasis Texas Brewing Company is located.

I am looking forward to Beer Bloggers & Writers Conference 2015 for many reasons.  The greater area of Asheville, NC, where the conference is being held this year,  is home to the second breweries of Sierra Nevada and Oskar Blues, which we will be touring.  By the end of 2015, New Belgium is scheduled to open their second brewery in Asheville as well.  The great amount of knowledge I will learn, the camaraderie I will take part in, and of course the great beers I’ll get to taste are all part of the fun.  This year I also look forward to Kim Jordan addressing the current trademark dispute her company is involved in.  Hopefully she can shed some more light on the issue for me and all of those attending her Keynote Address.