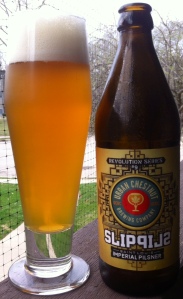 A little bit different, a little bit the same.  Though I have enjoyed my Pilsner phase over the past few days it is time to move on.  Well, maybe not move on entirely, but I wanted something that packs a bit more punch, something that maybe isn’t quite as light and crisp, something a bit more…Imperial, I suppose.  What better transition beer than the Urban Chestnut SLIPPILS?  It is still technically a Pilsner, using German Pilsner malts, but also adding in German Munich malts.

The bitter finish, similar to a Pale Ale or even some IPAs, gives away that a lot more hops are used in the brewing of this Pilsner.  It also has a darker coloration, and the 7.5% ABV is much higher than you would find in a regular old pils.  The closest comparison beer is the Sierra Nevada Hoppy Lager, though the SLIPILS is much maltier.

This isn’t my favorite brew by Urban Chestnut, but I like the creativity in this Revolution Series #9 beer, and I just love the name1.  This is a beer that is perfect for a variety pack or as part of a flight.