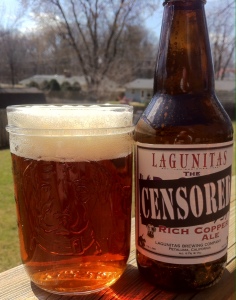 Censored?  What exactly was censored?  I had to know what word was being covered up by that “Censored” strip.  I was worried this would take some effort, like it did to track down the original label of the Lagunitas Cappuccino Stout online, or having to call the brewery to get the full story on the Lagunitas Undercover Investigation Shut-Down Ale.  I went to the Lagunitas website and to my surprise it was stated right there on the “Censored Rich Copper Ale” page.

“Originally called the Kronik, this beer was censored by the federal label-approving agency, the BATF  — they claimed the word had some sort of Marijuana reference.  We slapped a “Censored” sticker on it as a joke and they accepted it.  Whatever.”

First and foremost Lagunitas makes great beers.  But it is things like the above quote that make me like the brewery even more.

Unlike most of the Lagunitas beers I’ve had and reviewed recently this copper ale is significantly less hoppy, sitting at 35 IBUs.  So those of you who aren’t hop heads can drink this beer and enjoy it.  Despite the rich amber hue and it’s nice malt presence, I have found this beer quite refreshing.  This may have to do with the fact that I’ve been hitting the Imperial Stouts and Barleywines a lot recently.

The beer is crisp and clean with a nice standard red ale aroma.  Though it’s a year round offering, I’m finding it perfect for Spring weather.  On random days when it get’s up into the high 70’s it is still light enough to be enjoyed outside.  While when the temps drop back down below 40, the malt character makes it a fine beer to enjoy indoors with a blanket handy.  The 6.7% ABV makes it a nice beer to enjoy as your first or third in a night while tasting out a few different brews.  I personally have been enjoying it before or after a Schlafly Oatmeal Stout over the past week.

Lagunitas never fails to please.  I’ve been saying so for going on a year, but I really need to hit up one of the free tasting tours at their Chicago brewery location.  If you are overwhelmed by options and want a solid beer, regardless of style, you can always fall back on a Lagunitas.  In particular if you are looking for a solid red ale, this is a damn tasty and satisfying brew.

As always, with Lagunitas beers, I have to include the full wording on the label:

3 thoughts on “Lagunitas Censored Rich Copper Ale (aka The Kronik)”