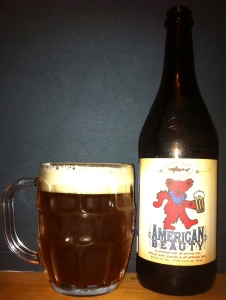 2015 –  At age 32, I listen to the Grateful Dead album “American Beauty” for the first time on YouTube, as I drink a beer with a label commemorating 50 years since their formation.

My parents aren’t and never were “Dead Heads.”  I’m not sure if that fact should have made me more or less likely to stumble upon the Grateful Dead.  I’ve been called a “hippy” on more than one occasion.  I’ve had friends who enjoyed the Grateful Dead.  Yet I never got into their music or their way of life.  I have been missing out.

When I saw this beer on the shelf, my first thought was of the movie with Kevin Spacey and Annette Bening.  Granted I was obsessed with that movie in late high school and throughout college.  Still I didn’t even connect that the bear holding a mug of beer was a Grateful Dead bear.  This is how out of touch with “Deadhead” culture I was, am.

I saw that the beer was an Imperial Pale Ale.  This enticed me.  Not only an Imperial Pale Ale but one brewed with almond honey granola.  Now my interest was severely piqued.  Still I held off.  Then I started hearing good reviews about it from people whose taste in beer I trust.  That was that, I had to purchase a bottle before they were all gone.

Then the waiting game began.  I knew I wanted to review this beer.  I couldn’t just drink it mindlessly while watching an NBA game or Last Week Tonight with John Oliver.  I needed to put some time in with the beer, focus fully on it and appreciate it.

The beer sat in the mini fridge in the basement for weeks.  The right time never seemed to come.  I even picked out a glass, a mug I own that looks pretty similar to the one the bear is holding.  I washed it and set it out to dry.  More weeks went by.  Everything was prepared and yet, something was keeping me from enjoying and reviewing this beer.

Spring came to Illinois this past weekend bringing warm temperatures.  Warm enough that I was able to wear shorts and a t-shirt yesterday and not freeze or look like a complete idiot.  I don’t know why it took Spring weather, but I immediately knew now was the time to open this bottle of beer.

I sat down in front of my laptop with the freshly poured beer at my side.  Normally I listen to Pandora while I type.  This beer would be different.  Sadly enough I had to Google “Grateful Dead American Beauty.”  I assumed they had a song or album by that name, but wasn’t sure.  I was able to find the whole album on YouTube.  I clicked on the play button.  I took a sip as I listened.

As all my typed words up to this point are evidence, I was completely in the dark when it came to “Dead Heads.”  Yet upon listening to the music playing on my laptop and drinking this fantastic beer it began to come together for me.

This beer is a collaboration between Dogfish Head, the Grateful Dead and both of their amazing fan bases.  The band suggested the base recipe of an Imperial Pale Ale of 9% ABV using all American ingredients.  Dogfish Head opened it up to the fans for suggestions on an ingredient that epitomized a “Dead Head” experience.  After 1,500 suggestions, 20% of which were illicit, illegal ingredients in most states, they settled upon granola.  After scouring the U.S. for the perfect granola they found Grizzlies Brand Granola out of Eugene, Oregon.

The beer’s American Pale Ale foundation is present throughout with enjoyable American hop characteristics.  The almond honey granola provides a most inviting sweet honey aroma and a fantastic almond granola flavor that melds wonderfully with the Imperial Pale Ale base.  The granola is ever present without being overwhelming.  This beer is down right delightful.  Delicious is the best word I can think of to sum it up.  While it will be hard to find a bottle right now, I believe it’s next limited release will be in May.  When you see it, grab a bottle and some friends, put on some Grateful Dead music and enjoy life to it’s fullest.