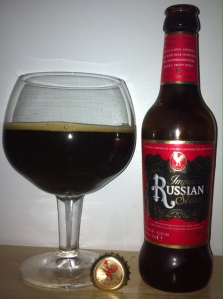 Here we are.  It is the midway point of Russian Imperial Stout Week.  It also happens to be beer 498 on my Countdown to 500 unique beer check-ins on Untappd.  I had made up my mind a couple weeks ago as to the beer I would be drinking and reviewing.  It was a beer I had heard good things about, a beer I was excited to try.  But…I wasn’t super excited.  There was something missing.  I was wondering up and down the beer aisle debating on whether I should go with a different Russian Imperial Stout, when my eyes landed upon this beer.  It was a tiny bottle with a large price, but as I picked it up I saw at the top of the label “As originally brewed in 1795 for Catherine The Great of Russia.”

This beer’s name and recipe, has changed ownership more times than I can accurately track down.  It started out under Thrale’s brewery as mentioned in my Two Brothers Northwind Imperial Stout review.  It changed hands numerous times until landing under Courage brewery where it was renamed to its current title.  Many hands did it pass through again, up until 2007 when Wells & Young bought the rights to the name and recipe and through whom we receive the beer today.

The journey of this beer is as varied and tumultuous as the first journey this beer must have underwent on its ship route to St. Petersburg.  I’m glad that I am able to take a step back into history with each sip, imagining being at the grand court of Catherine The Great.

There are some rich malt notes along with bitter complexity to this brew.  It is nowhere near as good as the Expedition Stout, but I can see how people would become enamored with the beer as it was their first exposure to the style.  It’s not as heavy as I thought it would be, although it hasn’t aged to its fullest.  Though it has made its way across the Atlantic I’m sure in the modern age this trip took a fraction of the time it used to take to get from London to St. Petersburg.

This is my favorite part of the beer.

Most beers have a born on date, this beer has a drink by date.  Yes that drink by date is accurate, it is February 9th, 2026, as it is a 2013 vintage.  That’s right, this beer can be aged up to 13 years.  I am incredibly tempted to buy 11 more of these to age, drinking one every year to see how the beer changes, but my wallet and patience sadly will not allow it.  Maybe I could just buy one more to hold onto until 2026.  Keep it as a time capsule of sorts.  What do you think, should I?

After my plunge into a historic beer, I’ll be returning to more recent times in my review tomorrow.  Not only will it be a unique beer but made by a brewery we have yet to review here at 365 Brew.  Come back Thursday evening to find out what beer 499 will be.