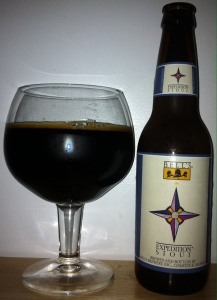 Plans prepared, schedules set, all to be undone by a microscopic bug.  36 hours now my immune system has fought the virus invader.  It appears that my body has gained the upper hand.  So now in order to keep my word, I embark upon this Expedition without delay.

Darkest black appearance for its body with a thin dark brown head, this beer awaits my lips.  I gladly heed its call and draw the liquid from the glass.  Heavy and oh so thick, the beer provides a complex swirl of wonders for the tongue.

This beer is far from an easy drink, not to say that it isn’t exceedingly enjoyable.  This is a sipping beer, on par with a good bourbon.  You could down it quickly, though it would take much effort, it is best to be savored.  To sip and take note of subtle changes in flavor as the beer moves from refrigerator cold, to cool and finally to warm as you take the final draught so none remains.

I picture a campfire set up in the snow.  A long journey north has been made and still more of the road lays ahead.  Tonight is a night for a rest, with a crystal clear sky.  The raging fire keeps you warm though you dare not remove any of the many layers of clothing you wear.  You have set your few bottles of Expedition Stout a few feet away from the fire, placed deep into the snow, only the bottle caps protruding.  It will only take a few minutes as it’s not like the beers are that warm to begin with, in this environment.  Ideally you would have a couple brandy snifters or goblet glasses to pour this exceptional beer into, but in these conditions you will be drinking straight from the bottle with your thick gloved hand tightly grasped around it.  You brought three bottles, one for each of your party of the insane.  Why did you all decide to set out on this adventure again?

The bottles chilled, passed around and opened, you three clink beers, say “Cheers” and tilt the bottles into your waiting mouths.  This moment, this is the very one in which the aurora borealis begins. 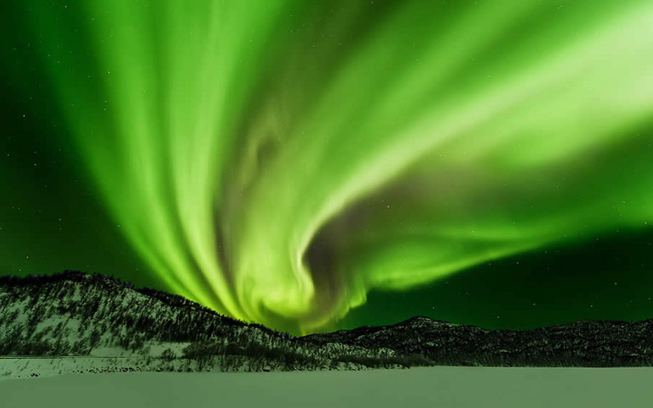 You three sit in awe, speechless.  Staring at the beautiful display of dancing charged particles interacting with the Earth’s magnetic field, the only movement that you make is from time to time taking another sip of Expedition Stout.  The rich complex malt flavor pleases you, while after awhile you begin to notice hints of chocolate and dried fruit.  The intense bitterness has mellowed a pinch over the course of time, it being months since you had the first bottle of the 6 pack, back at home.

You three reach the end of your bottles, with just a gulp left in each.  You again raise your beers in silent toast, then finish off the delicious beer as the Northern Lights wain.

Though they called you three crazy and after so many months in, you realize there was some truth to their words, tonight alone has made the Expedition worthwhile.  Your only regret is not bringing more of the Expedition Stout to enjoy.

Special thanks to wallpho.com.  You can download the above aurora borealis picture here.