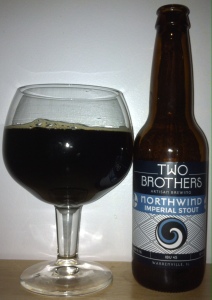 It’s the last week of January, which means two things: 1) The Superbowl is almost here, shocking, I know, this must be the first you are hearing about it.  2)  It’s really damn cold cause it’s the middle of winter1.

So here at 365 Brew we have decided to celebrate the best type of beer to drink when it’s freezing outside, a Russian Imperial Stout.  This beer also happens to make for a great brew to bring to a Superbowl party.  Those at the party who like craft beers will be overjoyed, those who don’t won’t touch it so that means more for you.

I won’t trouble you with too much of the history of Russian Imperial Stouts.  The name basically gives you all the info.  My understanding, which comes from hearsay, many a beer label and this enlightening post, goes as follows.  Back in the 18th century, the Empress of Russia, Catherine the Great, was a big fan of dark hearty beers.  As a gesture of goodwill, Thrale’s brewery out of England made a beer with sufficiently high alcohol content to endure the harsh freezing temperatures during the transport to St. Petersburg.  It was such a hit that Catherine continued ordering it for herself and her court.

One of my first experiences with a Russian Imperial Stout was North Coast brewery’s Old Rasputin.  To this day it is one of my favorites.  That particular beer is pretty complex and could be daunting, even off putting to someone looking to broaden their beer horizons.  If you are looking to venture into the dark and hearty side of the beer world, I recommend the Two Brothers Northwind Imperial Stout.

The Northwind Imperial Stout has a dark rich malty aroma that is common for this style of brew.  The flavor of this beer is smooth and creamy with just a touch of complex bitterness in the finish.  For a Russian Imperial Stout it is very easy to drink.  You are not going to be paralyzed with rich malt complexity and bitterness.  It is not overly thick and while it packs a punch sitting at 9.1% ABV, it won’t take you an hour to get through a glass.

The roasted malt character does become more pronounced about ⅓ the way through the glass, but by this time your palate is able to absorb it and appreciate it.  I wouldn’t hand this off to a Bud Light fan and tell him or her to knock it back.  If you are aware of the waters you are testing out though, this is a great gateway or entrance beer to start you on your journey towards loving Russian Imperial Stouts.  The only drawback to this beer is that it has a limited distribution area.  If you find it in your market, definitely grab a 6 pack.

Stop by tomorrow to find out about my thoughts on Bell’s Expedition Stout.  Yep, I’m moving straight on to one of the more complex Russian Imperial Stouts around.  Brace your palates accordingly.