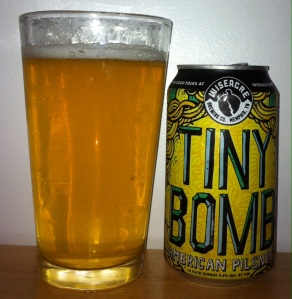 A great name for a beer, simple yet effective in grabbing one’s attention.  The brew’s name is deceptive though.  I initially thought that there would be a great burst of flavor, or an explosion of hop taste, or something that would represent the experience of consuming a tiny bomb.

Instead this beer is the antithesis of a bomb, tiny or otherwise.  Far from providing any palate explosions, this beer is smooth and mellow.  Pleasant and unoffending, it is an easy drinking beer that could be tossed back quickly and often.  It is unremarkable, though much better than your run of the mill, big brewery beer.  It’s a solid pleasing pilsner.

The Wiseacre webpage for the brew, speaks of the “waters from the Artesian wells” used in the brewing of the beer.  Before and after finding out that this beer is “spiked” with “local wildflower honey,” I’m still unable to pick up on said honey flavor.  Maybe the combination of honey and the well water used to brew it, help make the beer so mellow and soft.

I’m always happy to receive a beer that isn’t available in my area, and glad I got a chance to review this one.  I don’t think I’d purchase a 6 pack of this beer unless it was on sale.  Perhaps I’d buy a glass at a bar if it was on tap.  This beer isn’t worthy of a trip to bring back a 12 pack for your friend’s like the last pilsner I reviewed, Mama’s Little Yella Pils.

Wiseacre Brewing Company is located in Memphis, TN.  It was founded by brothers Davin and Kellan.  On August 11th, they celebrated the one year anniversary of their first brew day.  Let’s hope they get to celebrate August 11th, for many years to come.

One thought on “Wiseacre Tiny Bomb”