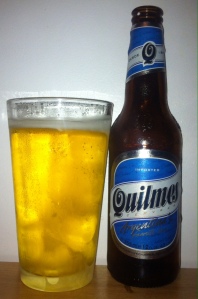 This beer tastes remarkably similar to Bud Light.  It has a nice light crisp flavor with a smooth clean finish.  It isn’t filling nor does it have any linger ill aftertaste, or much aftertaste at all.  It has another similarity to Bud Light, a blue, silver and white color scheme on its packaging.  I did some investigating to see if Quilmes saw the resounding success of Bud Light in the United States and was therefore mimicking it for Argentines.  How wrong my theory was.

Quilmes has been around for over 100 years, since 1890 to be specific.  Bud Light on the other hand is a young 32 years old, being first released the same year I was born 1982.  (It sure is nice to describe something my age as young.)  Quilmes is an ideal brew to enjoy with bar food or with snacks at home while watching Fútbol, basketball, or Fútbol Americano.  The one upside to this brew over Bud Light is the 0.7% higher ABV, which I assume helps the mass appeal of the beer.  It appears the Argentines have a bit higher constitution than us Americans when it comes to the alcohol content of their nation’s favorite beer.

I tried to do some further research on this beer and brewery, but their website is all in Spanish (which makes obvious sense).  Though I took years of Spanish, from 3rd grade all the way through college, “Yo se solamente cinco palabras.”  I will now accept any and all pity laughter for a joke I devised some 15 or so years ago.

I must give special thanks to my sister and brother in law who gave me this beer, along with 11 others, for my birthday.  They had no idea we would be doing a “Beers of the World Cup” theme here at 365Brew, what a nice happy coincidence.  They will be getting credit and praise many more times as I review the other beers they sent me.  Thanks again for the great birthday gift, incredibly even better than last years!