Mendocino Eye Of The Hawk 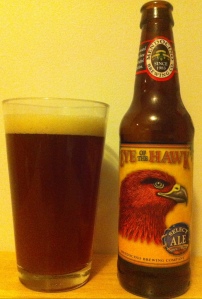 From first sip to last drop, this beer is “meh inducing,” if you will allow me to steal that phrase from one of my previous reviews.  It’s a simple beer, with little to nothing going on with it.  There is no hoppy bitterness, no sweetness, nor smokiness.  It’s just an ale.   There is an overly malty aftertaste but even that doesn’t linger.  This beer is neither good nor bad, it just is.  The best redeeming quality of the brew, if I had to pick one, is its 8% ABV.  Rating a beer solely on its higher alcohol content is not ideal.  There just isn’t much substance to this beer.  Thankfully I was able to obtain this beer at a low end price; otherwise I would be giving it much harsher criticism.  I’d give it a try if I saw it on tap at a bar, but wouldn’t recommend purchasing a 6 pack.  Knocking back a couple of these is equivalent to having four bud lights, but I’d rather have the experience of those four bud lights than two of these.  As I finish the glass my disappointment increases.  Its lackluster flavor leaves much to be desired.  I suppose if you are simply looking to get drunk, you could down a 6 pack and be happy.  But even if a far gone state of inebriation via beer is your goal, there are so many more beers that pack a punch and a rewarding flavor that can accomplish the same end.

Mendocino Brewing was founded in August 1983, a mere 14 months after I was born.  Time really is a bitch and I seem to feel older with every passing year.  Enough about my laughable aging morose though, let’s get back to talking about this brewery.  It was started in the most aptly named town of Hopland, California.  When they opened their brewpub it was the 2nd of its kind since the repeal of Prohibition in 1933.  It only took 50 years for the good old U. S. of A. to get its 2nd craft brewery and we haven’t looked back.  Over 1500 craft breweries now populate the United States.  Americans do love choices when it comes to their beer and thank goodness for that.  I would hate to be stuck in a country where Eye of the Hawk was the only Ale available.  I grabbed a 6 pack of their Black Hawk Irish Stout as well.  Hopefully their Stout is more pleasing than this Ale.  Return to this dial next week, to find out.