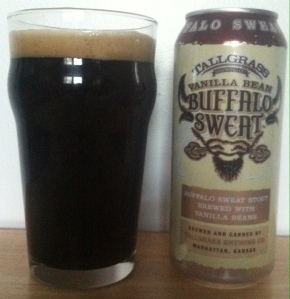 I first discovered Tall Grass Brewing Co. back in late October when I reviewed their best selling beer, Buffalo Sweat.  Their website at the time was promoting their winter seasonal, Vanilla Bean Buffalo Sweat.  I have been anxiously waiting to try that beer ever since.  Every couple of weeks, I would enter my favorite store and ask “Get any Vanilla Bean Buffalo Sweat, yet?”  Every time it was the same answer, “No.”  I started to lose hope as winter came upon us and I saw spring seasonal beers appearing on the shelves.  Would I really have to wait until next winter to try out this beer that I had been longing for months to taste?  Then it happened.  One marvelous Thursday I entered the store and was walking down the beer aisle trying to decide what I would purchase when I saw it.  A new Tall Grass can, one I hadn’t seen before.  I got closer; my heart began to pump faster as my excitement rose.  Could it be?  Was it really here?  Were those 4 packs of the Vanilla Bean Buffalo Sweat?!  I didn’t want to believe, just to be disappointed, but there it was, the same buffalo head logo only on a vanilla colored can!  I grabbed a 4 pack and immediately went to the cashier to purchase it.  In my excitement I forgot to grab a couple of other brews that I was looking at.  It didn’t matter though; the beer I had been yearning for these past several weeks was firmly in my grasp.

I decided to drink an original Buffalo Sweat and then taste the winter seasonal version.  That way I could get a nice comparison of the two.  As one would expect they have the same smoothness level.  Both are delicious and full flavored.  The Vanilla Bean Buffalo Sweat is predictably sweeter, but not overpoweringly so.  The vanilla bean infused into this brew is a delightful compliment.  My high expectations, which were amplified due to the long wait, were indeed meet.  In fact, I’ll be grabbing another 4 pack of the Vanilla Bean Buffalo Sweat tomorrow.  This is a wonderful winter seasonal and packs just the right amount of sweetness for me to endure the never ending days of snow covered earth.  I must say this brew is much better consumed out of a glass.  The pint cans are nice and I like the logo, but as with most beers, pouring it into an appropriate glass can make all the difference in the world.  Tall Grass has succeeded again.  I now want to review their Zombie Monkey Porter and Velvet Rooster Belgium-Style Tripel.