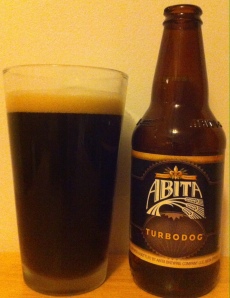 The beer has a dark black coloration which is aesthetically pleasing to the eyes.  It pours evenly and has a nice head.  There isn’t much nose to the beer, but as I am stuffed up due to the below zero temperatures, I’m not the most reliable critic on its aroma.  This dark brown ale is not bad.  It has a slight chocolate taste with a bit of a sweet finish.  It’s the first beer I’ve ever had from Abita.  From what I’ve heard this is not the best beer they have to offer, but considering I found a 6 pack on close out for $3.99 it was hard to pass up.  Though it’s not bad, it certainly isn’t great either.  I’m glad I’ve tried it and I wouldn’t turn down a free one when offered.  This is a beer best consumed after you have already had one or two tasty beers and the ensuing buzz makes your palate less discriminating.  I will hold off on judging the Abita brewery based on this single beer.  I’ve heard great things about the Abita Purple Haze and will have to give that one a try.

Abita was founded in 1986, just 30 miles north of New Orleans.  The demand for their beer outgrew their original facility in just eight years, forcing them to move into a larger state of the art facility down the road.  They converted the original brewery site into a thriving brew pub.  Along with the number of different beers they make, they put out a root beer which I would like to taste.  Next time I’m in Louisiana I’ll make sure to try out some of their beers on tap.  Abita provides yet another reason for me to make a trip down to New Orleans.