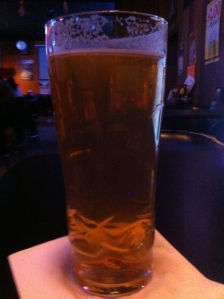 I was feeling restless.  I’ve been putting off this review for days now.  It’s currently 11PM on Monday night, and this post needs to be up by 10AM Tuesday morning.  I usually sit down in a nice quiet place with a nice mug or glass.  I pour the beer and sit in contemplation, as I try to suss out the particular nuances of the brew.  Not so for this review.  I made my way in the crisp autumn night air over to the Crow’s Mill pub.  I entered to the exact opposite of dulcet tones.  Metallica’s “Master of Puppets” was blaring over the stereo.  As that song faded and I was able to hear myself think for a brief moment, more hard rock began to play.  At least they were phasing out of heavy metal and into classic rock.

Anyway this is the setting in which I wrote my review.   I picked out a table in the back corner, pulled out my lap top and turned it on.  While it was booting up, I went to the bar and asked for a 312, as that was the only beer on tap that I hadn’t tried before.  I sat down and immediately googled it, to see what kind of beer I was about to drink.  I found out that I had ordered an urban wheat beer.  I hate wheat beers.  Well, now it was time to see how much I would hate this one.

Right away, I can tell that it has a much lower ABV than most of the beers I’ve reviewed.  Hmm… I can’t really get a sense of the flavor of this brew.  It’s very light and that’s about all I can say about it positively.  It’s very underwhelming.  The GooseIsland website suggests pairing this with salad or fish.  That immediately signifies that it’s not a good beer.  I’m not a fan of fish at all and while I like salads, I don’t think want a beer paired with one.  This beer would be a good shot chaser but not at the premium price.

The more of this beer I drink the weaker it becomes.  I won’t be buying this one again.  I would only recommend it for fans of wheat beer, and even then, I’m sure there are other better ones worth spending your money on.

The name for this beer is inspired from the Chicago area code of 312.  Goose Island claims that the beer is as densely populated with flavor as that particular area of Chicago is with people.  It sure makes for nice word play, but it would work better if it was named 575, for the sparsely populated area code that encompasses almost the entire state of New Mexico.  It’s barren flavor, arid taste and sand colored look suits that desert climate, where water would be much preferred to this brew.

I had to chug the last 1/4th of this beer so I could get a different beer to restore happiness to my strained taste buds.  Hopefully I’ll pick out a better brew for Friday’s review.